Oshae Brissett kept his cool through the weekend and focused on the task at hand.

The Raptors’ rookie forward looked at the players he was on the court with — Kemba Walker, Jaylen Brown and Jayson Tatum on Saturday night, then Chris Paul on Sunday night — and didn’t let his eyes get wide. You do that on the court and you’re looking at the back of said star players’ jersey, then likely watching from the bench for the rest of the game.

After the game, it can be a different story.

“I’m going to go back home tonight and reminisce. It’s crazy that I guarded CP in an NBA game,” Brissett said after the Thunder held on to beat the Raptors 98-97.

Brissett’s opportunity has come through a bad situation — his minutes have gone up in the indefinite absence of Pascal Siakam, Marc Gasol and Norm Powell — but the 21-year-old is contributing and helping his team stay above water with those three tremendous absences. The Raptors’ loss on Sunday dropped them to 3-3 since the injuries were announced, when many feared a much worse outcome.

Brissett had four points and a rebound in 17:34 on Sunday, after making a game-swaying impact in Saturday night’s win in Boston with some tough defence and a lot of work on the glass. He had six rebounds in 15 minutes but in the pregame on Sunday, coach Nick Nurse said Brissett could have had 12 boards in that game.

“It was a little bit of a wildcard move,” Nurse said, “but you know how that goes with us. If we throw the wildcard in there and they play pretty good for three or four minutes they might never come out. That’s what happened with him (in Boston) and it was excellent.”

There was a bit of history on the court on Sunday and it worked out well that it happened in Toronto. Brissett and his Raptors teammate and fellow Canadian, Chris Boucher were up against a pair of Canadians on the Thunder, in guards Shai Gilgeous-Alexander and Luguentz Dort. It was the first time that four Canadians scored in the same game.

“Little things like that mean the world to me,” Brissett said.

“We’ve all been growing up wanting to play for a team like this and some of us are here and playing against us is probably just as big. I’m happy for those guys over there and what they’re able to do and encourage them to keep going.”
Boucher felt the same way. He’s a little older than Dort (Boucher is 26 and Dort is only 20) but they grew up in the same neighborhood in Montreal.

“We have so many Canadians in the league now, it’s amazing,” he said.

“When you think about further and the Olympics and all of that…it’d be good to see a bunch of Canadians doing good and having their own way. We have me and Oshae and they have Luguentz, I’ve known since he was very young and Shai. It’s so good to see those guys on the floor and all contributing to their own team.” 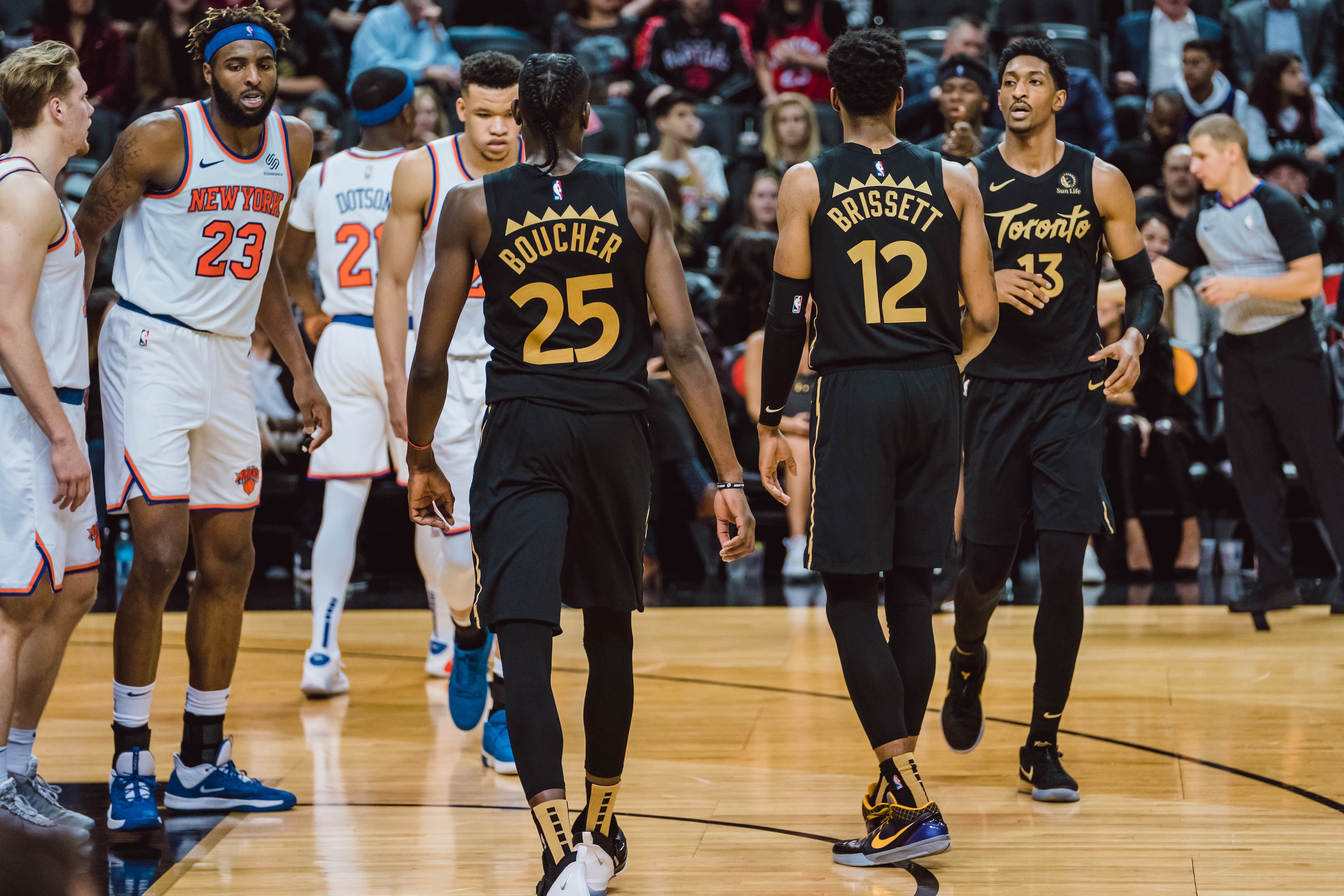 Boucher had already started to win Nurse over with his skill set before the team was hit with injuries in that game against Detroit on Dec. 18. He’s continued to show well against big men of all sizes over the last six games and posted career bests in two of the last six games, scoring 21 against Dallas and going for 24 against Boston on Christmas Day.

The G League’s MVP and defensive player of the year in 2019, Boucher said he’s tried to encourage Brissett as he’s worked through this season on a two-way contract. “He’s been good, he’s been staying ready all the time,” Boucher said of his teammate.

“I was in the 905 before and I told him that two-way G League players there’s a bunch of guys that were there before and when your time comes you have to be ready. That’s what he did (in Boston) and he did it again today. I’m happy for him, he’s a talented kid.”

Boucher showed off some of his talent on Sunday night, finishing off a huge lob thrown by guard Terence Davis Jr.

As soon as Davis got the ball near the top of the key, Boucher was running to the basket and pointing skyward.

Davis followed the order and lobbed a perfect pass toward the bucket. Boucher’s long, outstretched arms caught the ball and hammered it home overtop of OKC forward Darius Bazley. It brought 19,800 fans at Scotiabank Arena and the entire Raptors bench to their feet.

“I had a bunch of dunks like that in college but in the NBA I’ll definitely take that one as one of the best ones, for sure,” Boucher said. The highlight-reel play was part of his nine-point, five-rebound performance in 19 minutes.