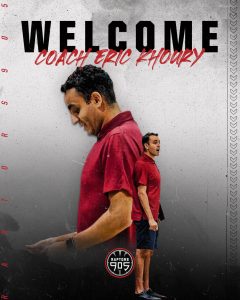 Raptors 905, the NBA G League affiliate of the Toronto Raptors, announced Tuesday that Eric Khoury has been named head coach. He becomes the youngest head coach in Raptors 905 franchise history.

“We are proud of our developmental program – not only for players, but for staff as well. Eric is a prime example of growth within our organization, and we are eager to continue developing his abilities as an NBA-calibre coach,” said 905 Vice President Courtney Charles. “We are thrilled to welcome him back to Raptors 905.”

In 2019, Khoury was named the lead assistant coach and offensive coordinator for Raptors 905. In 2020, the 905 finished the season with the best record in the league and led the G League in offensive efficiency. He helped five players earn NBA callups before returning to the Raptors bench as an assistant coach in 2021.

“I’m honoured to be re-joining Raptors 905. I’m thankful to all the mentors I have met within the organization over the years and am excited for the opportunity ahead,” said Khoury. “I am a firm believer in the coaching philosophy and organizational culture that we have in place, and my goal is to create an environment where the players and coaching staff can contribute to winning at a high level and take that next step in their careers.”

Khoury takes over the team from Patrick Mutombo, who has joined the Phoenix Suns as a member of Monty Williams’ coaching staff. In two seasons with the 905, Mutombo finished with a 36-11 record while leading his team to back-to-back conference finals appearances.

“Eric has a really unique background, combining a love for basketball with a post-graduate degree in engineering. He’s dedicated himself to coaching the last 5+ years and I think that experience and perspective, along with a real commitment to player development, will help him flourish as head coach of Raptors 905,” Toronto Raptors General Manager Bobby Webster said. “We’re excited to see him develop as a coach alongside the players he’s working with.”