“We are thrilled to bring an NBA Development League team to basketball fans across the 905 region,” said Masai Ujiri, Toronto Raptors president and general manager.  “Raptors 905 will give our young players a great opportunity to develop and gain valuable experience, while providing high level, affordable basketball to the community.”

“We are excited and proud to have the Raptors 905, Canada’s first NBA Development League team, call the Hershey Centre home,” said Mississauga Mayor Bonnie Crombie. “Residents and fans from across the Greater Toronto Area will enjoy affordable, professional basketball. This will be a tremendous boost to Mississauga’s economy and thriving sport tourism industry. Working together, the Raptors and the City of Mississauga will demonstrate the benefits sport can contribute in building strong and healthy communities. We are looking forward to a lasting partnership with Maple Leaf Sports & Entertainment and the Toronto Raptors.” 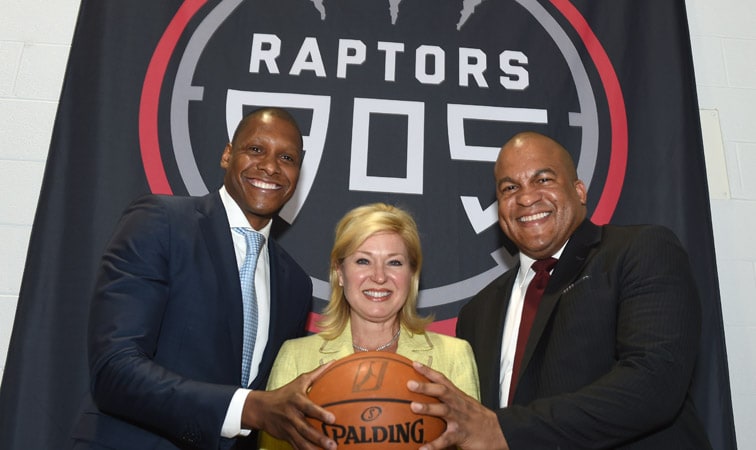 “The announcement of Raptors 905 is an important step in the growth of the NBA Development League and heralds an exciting time for Raptors fans across Canada,” said Malcolm Turner, president of the NBA Development League.  “As the record 19th team in the NBA D-League, Raptors 905 is evidence not only  of the value the Raptors place on developing young players but also of their commitment to providing fans with the NBA D-League’s unique brand of high quality basketball.”

Eight members of the 2014-15 Raptors roster had NBA D-League experience, while the team has assigned four players over the last three seasons to hone their skills in the NBA D-League.  Additionally, Raptors assistant coach Nick Nurse spent six seasons on NBA D-League benches, winning the Championship in 2013 at the helm of the Rio Grande Valley Vipers.

Maple Leaf Sports & Entertainment worked closely with the City of Mississauga and National Basketball League of Canada (NBL Canada) to build on the success of the now-former Mississauga Power in an effort to elevate professional basketball in a market of 3.4 million residents, including 757,000 in Mississauga – the sixth largest municipality in Canada.

“On behalf of the NBL Canada, we are excited that one of our franchises and key personnel will be joining the Raptors organization as they expand basketball further into Canada with the first NBA D-League team outside of the USA,” said NBL Canada Commissioner David Magley. “This move is consistent with our shared objective of growing the game of basketball throughout all of Canada.”

“As an investor and an avid basketball fan I’ve always wanted to contribute to the growth of the game in Canada,” said Henry Chow, Owner and President for the now former Mississauga Power. “When I became sole owner of the Power and moved the team to Mississauga it was with the vision that pro basketball would be a success in such a wonderful, prosperous market and I’m thrilled to have achieved that goal.”

The 19-team NBA Development League, founded in 2001, is the NBA’s official minor league whose teams have direct affiliations to NBA franchises. This season, a record 47 NBA D-League players earned a record 63 GATORADE Call-Ups to the NBA, while more than 40 percent of the last five NBA Draft classes have honed their skills in the NBA D-League, including 15 2014 first-round selections.

Deposits for season tickets, mini-packs and groups can be made by clicking here.

About the NBA Development League
The NBA Development League is the NBA’s official minor league, preparing players, coaches, officials, trainers, and front-office staff for the NBA while acting as the league’s research and development laboratory. Featuring 19 teams with direct affiliations with NBA franchises for the 2015-16 season, the league offers elite professional basketball at an affordable price in a fun, family-friendly atmosphere. An all-time high 38 percent of all NBA players at the end of the 2014-15 season boasted NBA D-League experience. In fostering the league’s connection to the community, its teams, players and staff promote health and wellness, support local needs and interests, and assist in educational development through NBA D-League Cares programs. Fans can watch all NBA D-League games on nbadleague.com.

About the City of Mississauga
As Canada’s sixth largest city, Mississauga is home to 752,000 residents and more than 54,000 businesses, including more than 60 Fortune 500 companies with Canadian head offices or major divisional head offices. A diverse, progressive and award-winning municipality located on the shores of Lake Ontario in the heart of the Greater Toronto Area. Mississauga is focused on delivering services, implementing its Strategic Plan, delivering value for money and maintaining infrastructure.