Raptors 905, the NBA G League affiliate of the Toronto Raptors, have announced its broadcast schedule for the 2021 NBA G League season. All 15 games will be broadcast on Sportsnet, TSN or Raptors905.com, and be available on NBA TV Canada either live or on tape delay.

Sportsnet will carry five contests, with three of them on Sportsnet ONE and all of them being available to stream on SN NOW. Sportsnet opens its coverage with the second game of the season when Raptors 905 take on the Erie BayHawks on Friday, Feb. 12 at 11 a.m. (Sportsnet ONE and SN NOW).

TSN will broadcast four games, including the highly anticipated meeting with Team Ignite, a collection of top prospects and NBA veterans, on Saturday, Feb. 13 at 7 p.m. on TSN2. All four contests are available to TSN and TSN Direct subscribers.

Calling all the action will be a group of promising Canadian broadcast talent, led by familiar 905 faces Akil Augustine and Amy Audibert. Savanna Hamilton, Jevohn Shepherd and Randy Urban will also be lending their expertise and unique perspectives to viewers throughout the season.

Sauga960 returns for a second season to be the radio home for all 905 games, with the trio of Matthew Cullen, Jevohn Shepherd and Jason Thom calling all 15 games for the 905 community.

All games will be carried on ESPN+ in the United States with the lone exception being Feb. 27 vs. Westchester when the game can be seen on NBA TV or streamed on Twitch. 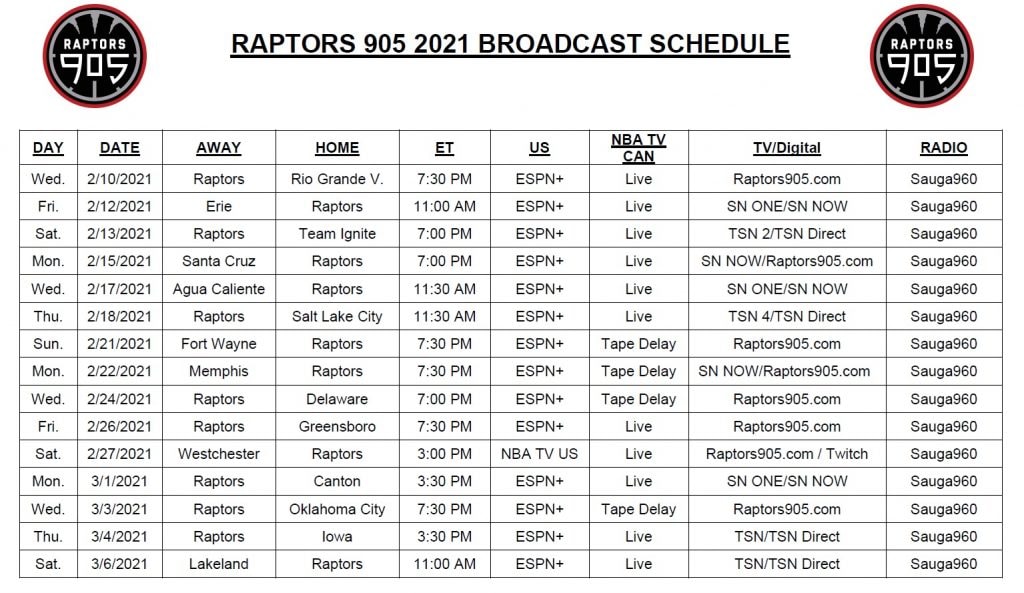