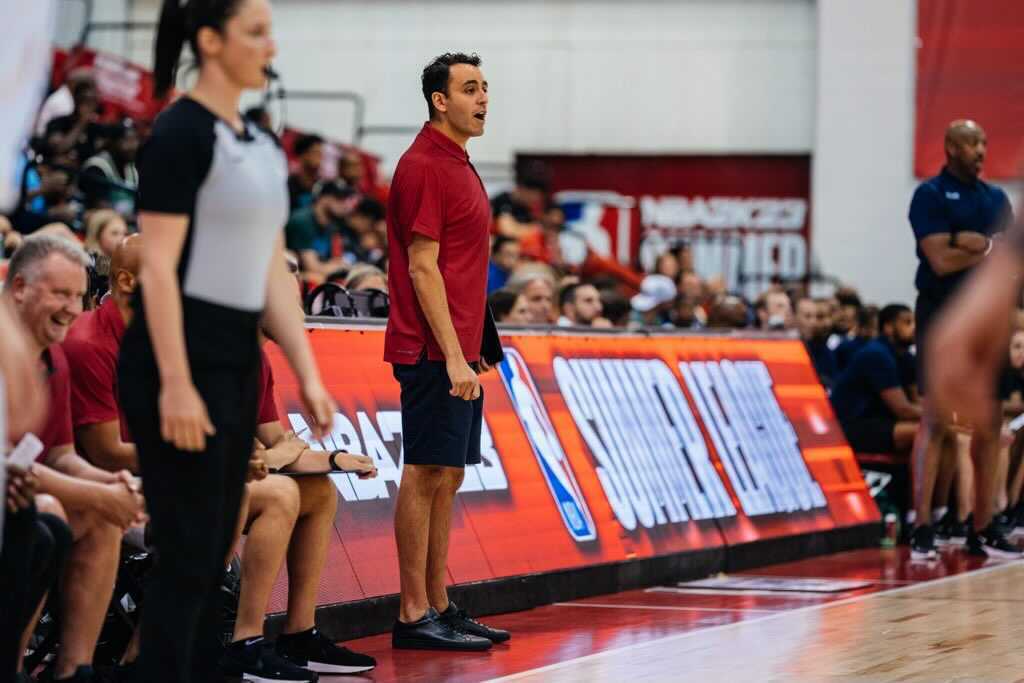 It is not every day that you listen to a basketball coach speak and hear a reference to Isaac Newton’s Laws of Motion.

That’s a big part of who new Raptors 905 head coach Eric Khoury is, though, and why the organization loves what he’s brought to the table since 2013 as a 23-year-old and saw him as the best candidate to replace Patrick Mutombo, who moved on to an assistant coaching role alongside Monty Williams with the Phoenix Suns earlier this summer.

Khoury has loved the game of basketball all his life and as a Toronto native has always cheered for the Raptors. He holds an educational background in Aerospace Engineering with a Master of Applied Science in Experimental Fluid Dynamics from the University of Toronto. The intelligence of a person lies in not only their ability to understand complex ideas but explain them in simple terms, and Khoury breaking down how his formal education and approach to basketball coaching will collide during his introduction at OVO Athletic Centre Wednesday morning show just what makes him special.

“If you don't know the basics of physics you're not going to be able to expand on all the amazing equations that will come out of it, and I think it's very similar to basketball,” Khoury said. “If you don't know the basic fundamentals... you can design all these amazing, intricate plays but nothing good will come out of them if you can't execute the principles. So, I'm very focused on not having a whole bunch of rules that you have to run as staff and players, but having a lot of principles that you can very strongly execute.”

Pursuing this dream began with some tweets to members of what was then Bryan Colangelo’s Raptors analytics department which turned into emails and then into coffee and finally an internship. Khoury was able to convince the team of the parallels between what he was studying and what the department was trying to accomplish and proved his worth to the extent that he was kept on as coordinator of basketball operations and analytics when Masai Ujiri took over as general manager.

During this time, Khoury also came to realize that he couldn’t take his data analytics to the next level without knowing more about the game at the highest level. As a result, he started spending more time with the assistant coaches to pick their brains as much as he could and the ones who were kind enough to humour him with extended conversations provided the spark for his coaching passion. Khoury was eventually promoted to manager of analytics and after expressing his passion for coaching to the front office, became an assistant coach in 2017. Courtney Charles, who now serves as Raptors 905 Vice President, distinctly remembers an interaction between Khoury and a star veteran that crystallized what his future may entail.

“I saw him sitting in there talking to Serge Ibaka and really getting Serge to a place of understanding his role on this team and making him feel comfortable with the different concepts and different things that we’re running and playing,” Charles said. “That’s when I was able to see the leadership and the growth of where Eric had gone. I’ve been able to see him in just an analytical form, which was [to] produce information, produce numbers, and allow somebody else to read it and present it and he would wait to hear how it went and how the results are and now he’s actually doing it himself and he’s doing it with players.

“We know that leading players, relationship building, developing them on court and off court are keys to how head coaches rise and that was probably one of the first times I was able to see how [far] he has come in communicating and leading when it came to players and basketball specifically.”

Khoury maintained his upward trajectory as a member of Nick Nurse’s championship winning staff in 2018-19, as well as on Jama Mahlalela’s 905 staff in 2019-20. The continued interactions with players furthered his understanding of communicating with players and staff, as well as the deeper intricacies of the game. As alluded to earlier, it’s all part of the process of getting him ready to lead a hungry 905 roster in 2021-22. He knows he will have two-way contract signees Ron Harper Jr. and Jeff Dowtin Jr. to his avail, but the most intriguing relationship and development to track will be with 33rd overall pick Christian Koloko who is expected to see at least some time with the 905, and the two already got some quality time together in Las Vegas for Summer League.

Another relationship that will help define Khoury’s time as 905 head coach will be the one he shares with Nurse. The 905 and the Raptors have always maintained great synergy in terms of playing style and culture but with two minds as innovative as these, expect to also see a melding of minds when it comes to foraying into the future. Nurse has been called a “mad scientist” by Ujiri and so it should come as no surprise to see a few ideas that he might not deem quite NBA-ready yet floating around in Mississauga.

“Coach Nurse and I have talked about that a little bit, there are some interesting things we’re thinking about looking at and implementing at the 905 level,” Khoury said. “I won’t go into super details for obvious reasons but, yeah, we do want there to be a similar style of play between the two clubs but there might be one or two things on each end that we’re gonna experiment with a little bit.”

One of the greatest attributes of the Raptors organization as a whole has been its ability to produce wins on the scoreboard while also getting players where they want to individually. Khoury is more than familiar with that idea and so expectations will be high for someone who has seized every opportunity to this point. As much as analytics will always be a big part of who he is and building his career path, he’s someone who understands exactly how to take that information and help players understand how it impacts not just their own individual bottomline but the team’s as well.

“At the end of the day, players are really smart people,” Khoury said. “If you can show that you can help them grow and become better players and help them contribute to winning and help contribute to their success then you can have open and honest dialogue. If you're coming in [and] just throwing numbers at them and [they’re] saying what does this even mean, this isn't helping me, then you're not gonna go anywhere. And I was never one to just be dumping pieces of paper and walking away, I didn’t think that made any sense. So it's all about communication and taking really heavy dense data and putting it in a way that is digestible that could actually contribute to winning or contribute to their success.”